Words of the Week

The Words of the Week - August 5

Dictionary lookups from politics, civil court, and the world of disease 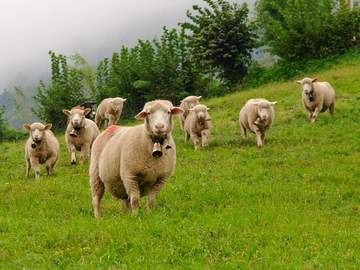 These sheep are all bellwethers

As the monkeypox virus continues to spread we have been seeing an increasing number of uses of the word epicenter to describe it.

Officials in New York City declared a public health emergency due to the spread of the monkeypox virus Saturday, calling the city “the epicenter” of the outbreak.
— Associated Press, 30 Jul. 2022

Epicenter is being used here in the sense that is synonymous with one meaning of center: “a point, area, person, or thing that is most important or pivotal in relation to an indicated activity, interest, or condition.” This is not the original meaning of epicenter, and it is one that some people find objectionable.

In seismology (the science of earthquakes), the epicenter refers to the part of the earth's surface directly above the focus of an earthquake (the epi- prefix means “over”). The word for the spot that is the actual focus of the earthquake, which occurs underground, is hypocenter. It would have made sense for people to use hypocenter in a figurative way to mean “like the center, but really the center,” but no one seems to have chosen to do this. However, many people seem to view the epi- portion of epicenter as an intensifier, and so we define this word both in a strict seismological manner, and also as a synonym for center.

Nomad was found in many headlines last week, after a cryptocurrency group of this name was reported to have lost a large sum of money.

Nomad means “a member of a group of people who move from place to place instead of living in one place all the time,” a definition that would seem to make it a fitting name for people affiliated with a currency that is ostensibly free and untethered by geographic constraints. The origins of the word are somewhat far removed from the digital currency speculators of today; nomad can be traced to the Greek word nemein, meaning “to pasture, distribute.”

Bellwether popped up in a number of newspaper articles over the past few days, especially those reporting on recent elections.

In current use bellwether most often means “an indicator of trends.” The word can also be used to mean “one that takes the lead or initiative.” These senses come from the word’s initial meaning, which was for a castrated male sheep (known as a wether) who lead the flock about with a bell on his neck.

How to interpret the Kansas referendum on abortion
— (headline) The New York Times, 4 Aug. 2022

A referendum is “a public vote on a particular issue.” If you are dealing with multiple instances of this, and are worried about how to pluralize the word you may relax, as both referendums and referenda are acceptable.

The civil trial of Alex Jones caused the word perjury to spike in lookups, after it was revealed that his attorneys had “accidentally” sent information from his phone to the opposing lawyers, and that this information might indicate that Jones had not been truthful in earlier court proceedings.

As Jones attempted to dodge the attempt from the plaintiff’s lawyer to confirm this was the case, the lawyer replied “You know what perjury is, right?”
— Kevin Hurler, Gizmodo, 3 Aug. 2022

Perjury has a relatively simple meaning: “the crime of telling a lie in a court of law after promising to tell the truth; false swearing.” The latter portion of this word comes from the Latin jurare, meaning “to swear.” The beginning portion of the word, the prefix per-, has a number of possible meanings, but in this case means “detrimentally, for the worse.” If you know someone who has committed perjury multiple times, and want to know the plural, it’s perjuries.

This week’s word worth knowing is matutinal, defined as “of, relating to, or occurring in the morning.” Some people like to get up early in the morning, and this is a word they might enjoy knowing about, saying it to themselves as they sit there all alone in the apartment or house, wondering if enough time has passed that they might wake up everyone else nearby.

You're (Probably) Saying It Wrong

The histories of 'dot-com,' 'grunge,' and other words of the nineties

Here are some of the words we're currently looking at for a spot in the dictionary.

The Hilarious History of 'OK'

The English language's most successful export is a joke